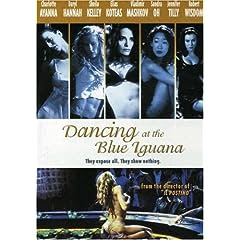 There’s no accounting for taste or personal preference when it comes to sexually suggestive or explicit material.  What turns one person (or one couple) on may be a total turn off to another. That’s what makes choosing a suitable adult film so difficult. Readily available information is seemingly at a premium unless, of course, you know where to look. The abundance of what’s often referred to as skin flicks is a tasteless excuse for gratuitous and unflattering sexual activity captured on film (not that there’s anything wrong with that).  There are, however, soft,  hard core and mainstream movies available that are of noteworthy erotic quality.


Connoisseurs of adult films may be well aware of the best in classic and current X, R, and M-rated block busters. But how many of us are connoisseurs?  And what about the beginner who has yet to see a really sexy film?


Dancing at the Blue Iguana may also serve as an unintentional guide on how to give the best head ever.  Pay special attention to the pole dancing scenes and recreate them orally. Yes Goddesses, The Art of Oral Pole Dancing is a creative technique you don’t want to miss out on.

Posted by Everyday Goddess - The Blog at 8:57 AM