Centerfold Fever (Richard Milner 1981) starring Samantha Fox and Tiffany Clark is an upbeat film about the search for the perfect model. B. Bola, Kandi Barbour, Lisa Be, Marc “10 ½” Stevens, and Ron Jeremy round out the all-star cast.  Ron’s reality-show fans might love to see him with a full head of hair and six-pack abs. The film is not known for its great dialogue or artistic brilliance. It is, however, comedic and fun to watch (most of the time).

Blogging about The Perils Of Goddessness (e.g. becoming too much of a Diva to do housework) has come back to bite me in my Goddess Ass.  My sweet husband made a gentle comment last night about the domestic status quo.  When I asked him if that was a complaint, he responded, "No, just an observation."  How can you not want to do more when you're married to a sweetheart such as mine.  So... I've been assigned several new duties which I'm determined to do thoroughly and with gratitude.
Posted by Everyday Goddess - The Blog at 11:08 AM No comments:

I've never considered (until recently) the potential for a downside to Goddessness. Although it’s not a terrible snag for me; it could be problematic for emerging Goddesses with partners less appreciative than my sweetheart of a husband.  What is this danger you ask?  You can become a Goddess Diva.

It’s no longer a surprise to me that the origin and history of the word diva is this: It. diva "goddess, fine lady," from L. diva "goddess," fem. of divus "divine (one)." Online Etymology Dictionary, © 2010 Douglas Harper

We’ve all heard stories (ad nauseam) of Hollywood Hotties, divas who embrace their adulation and privileged treatment as a right. Celebrities, clearly, aren’t the only individuals who can fall prey to the temptations of divahood. Take me for example. My Goddess persona began as a fun game of sensuality, sexuality, and intimacy. My honey was (and still is) on board with whatever amusements I conjure up. I am the Goddess; he is the enchanted mortal King.

Little did I know that my Goddessness would eventually permeate my earthly life.  One by one my domestic responsibilities went by the wayside.  I began to feel that my sole purpose in life was to have fun and be contagiously happy.  Consider the elements which recently contributed to the making of a perfectly joyful day.

* I woke up early and went to the track for an hour of glorious and sweaty exercise.* I meditated with my BFF Debra.* Deb and I went to one of our favorite spiritual venues, Flat Rock Brook, where we enjoyed a luscious day in nature made complete by singing frogs frolicking in the water.* When my wise friend suggested we go to lunch instead of rushing home to do some housework, I replied in the affirmative (of course).

Later on in the evening, when my honey and I were alone in our love nest, I told him all about my wonderful day. Not once, did he mention the dishes in the sink, the backlog of laundry, or the litter boxes that needed to be refreshed. He simply said, “I’m glad you had a nice day;” and he kissed me.

My Goddess inspired response was this: Silk Road by Kitaro (the music), a neon lit Pink Flamingo (the lighting), a and Body Works Caribbean Escape Candle (the fragrance), and a significantly better adventure than he would have gotten had he complained about my domestic neglect.

The moral of this story is this. When a happy Goddess becomes a carnal mastermind, the perils of Goddessnes may not be an issue.
Posted by Everyday Goddess - The Blog at 12:36 PM 1 comment:

Sometimes You Just Have To Fly 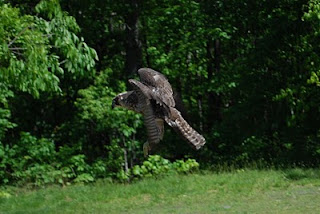 The last two weeks have been absolutely amazing. So what do I share today? I wonder which experience will resonate most and with whom?

Two week-ends ago, my honey and I attended two incredibly wonderful weddings.  Friends Buddy & Sherona got married; and six hours later Katie & Sing said their I Dos. Weddings are such joyful and optimistic occasions; there’s always so much love in the air and ethers.

Two days ago, Debra (The Medicine Woman), a group of bird loving others, and I released a Peregrine Falcon “Montclair” back into the wilds of Montclair, NJ.  Five and half months ago, Clair flew into a local hospital, was rescued and brought to The Raptor Trust where she was loved, nurtured, and Reiki’d back to health.

Yesterday, my darling daughter graduated from college with honors. I’m such a proud Mama. I love, like, and admire my beautiful girl.   She’s one of the most loyal people I know. She’s so smart and has an admirable work ethic.  She’s funny and creative. She’s all that, and much, much more.

What do the weddings and the graduation have in common? Buddy, Sherona, Katie, Sing, and my daughter, like the Peregrine Falcon, have taken flight into a new beginning.

May they (and you) be surrounded in love, look forward to the future with optimism, and find joy at every turn along the way through new beginnings.

Remember these words of wisdom:  Sometimes you just have to fly.
Posted by Everyday Goddess - The Blog at 6:24 PM 2 comments:

Getting Healthy With Dr. Oz

It feels like everywhere I go lately, I see something that reminds me of Dr. Oz. He’s on magazine covers galore, radio, and TV. I have at least a dozen Dr. Oz shows in my DVR library; and I’m currently carrying two magazines in my untidy and overflowing purse on which Dr. Oz’ sweet face is smiling at me, beckoning me to join him in the pursuit and attainment of health and wellbeing.

When I tackled the Dr. Oz National Sex Experiment, the results improved my marital relationship exponentially. Needless to say, I’m still following the Dr. Oz/Dr. Berman modus operandi for continued connubial bliss.  So why not take another challenge? But which one: The Dr. Oz Ultimate Diet, Dr. Oz’s Healthy Heart Challenge, the Ultimate Health Challenge, 10 Years Younger In 60 Days, or The Orgasmic Diet Action Plan?

My current life-style has dramatically deteriorated since my appearances on The Dr. Oz Show early this year. What’s up with that? I used to wake up every day at 6 am (rain or shine) and go to the track (5 miles, 7 days a week).  Now I wake up at 6 am, make myself a cup of coffee, go straight to the couch (remote control in hand), turn on the TV, and wait for my kitty Jellie to fall asleep in my lap. And that’s just the beginning of my day. All but my sex life has deteriorated dramatically… and even that has become a little ho-hum lately.

I’m overwhelmed with the options for renewing my health vows. I obviously need a Goddess Make Over, from the inside out. Dr. Oz recommends finding a partner who’s on “the same journey to health.” So who’s it going to be:  my BFF (Debra) or perhaps one of you?  I’m starting something tomorrow.  I am. I really am.
Posted by Everyday Goddess - The Blog at 4:50 PM No comments:

For All Intents And Purposes

I’m suffering from une Crise de Retrait de Statistique (severe statistics withdrawal). The fact that I’m unable to check page impressions (by day, week, month, and all time) doesn’t stop me from visiting the AdSense Overview page. I stare at the number of my “All time” page impressions, that number frozen in time, and lament that the AdSense Police deemed me unfit for their advertising (and page impression counter). I continue to surf the net & stop at the Overview page to see if I’ve been enabled, like a laboratory rat that continues to run a maze hoping there’ll be a piece of cheese at the end instead of an electric shock.

Why do I care about the statistics anyway? I care because I often wonder who besides Debra, Barbara, Tina, Joyce, Uncle Ed, Mark, Jan, and Aaron are reading my humble e-pages.

I wonder if I’m fulfilling my purpose.

I wonder what my purse is.

Despite my purpose (whatever that may be), my intention is to tell the story of how I found “my happy” so that perhaps you can find yours.
Posted by Everyday Goddess - The Blog at 5:20 PM No comments: